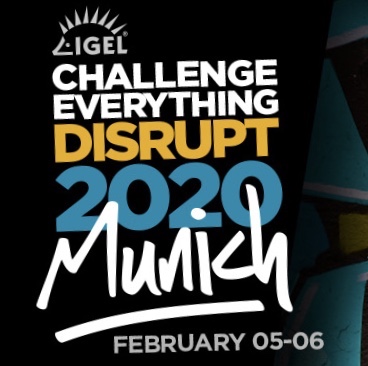 Last week’s Disrupt Nashville was a great success! 500+ participants, IGEL and Microsoft announced GA of Windows Virtual Desktop client on IGEL OS. We had a amazing time at Gaylord Opryland Resort, and got a fair share of Country music at Broadway in central Nashville!

Now it is time to start up Disrupt Munich. Initiating with IGEL Kickoff 2020 morphing in to Disrupt. Look out during the week from more new announcements and releases from IGEL. Let’s see if the software company have some hardware release to announce!?

I will be powering the #RemoteVR booth, come by and have a sneak peek on what’s coming to be announced. IGEL is disrupting with software AND premium hardware. Your Choice, Your Move! Reuse existing endpoints or replace!

See you at Disrupt Munich!